According to the Australian Bureau of Statistics, autism affects approximately 1 in 150 people in Australia, with the condition being most prevalent among children 5-14 years of age. This demographic has also experienced the greatest increase over time. Autism now affects 1 in 3 children aged between 5 and 15.

Since most children spend a majority of their first years of life in and around their homes, we should consider whether the home environment might be affecting a child’s health.

Emerging link between autism and EMFs
As we go about day-to-day life we are constantly exposed to an electromagnetic haze in our homes, schools and public places. Our environment is inundated with cell and DECT cordless phones, wireless routers, and wireless devices and games.

Reported ASDs have increased in time with our use of wireless technologies. (Herbert & Sage 2013 a) Findings have suggested a significant role of electromagnetic radiation in both the aetiology of autism and the effectiveness of therapeutic measures used for the management of ASDs (Carlo & Mariea 2007). Coincidentally there are striking parallels in both the physiological impacts of EMF and RFR exposures and ASDs (Sage & Burgio 2018, Calvente et al 2016).

Neurodevelopmental and neurobehavioural changes in individuals that have been linked to wireless technologies include: (Sage & Burgio 2018)
• Memory, learning, cognition, attention and behaviour abnormalities
• Changes in brain and autonomic nervous system electrophysiological function and sensory processing
• Sleep disruption (Herbert & Sage 2013 a)

Pathophysiological links between ASDs and EMF exposure may include: (Herbert & Sage 2013 a and b)
• Elevated oxidative stress and evidence of free radical damage and cellular stress proteins
• Brain oxidative stress and inflammation
• Deficiencies of antioxidants such as melatonin and glutathione. Physiological levels of melatonin are commonly below the norm in ASD and correlates with autistic behaviour. EMF/RFR exposure has been shown to impact melatonin levels
• Mitochondrial dysfunction: in a meta-analysis of children with ASD and mitochondrial disorder, spectrum severity varied, and 79% were identified to not be associated with genetic abnormalities.
• Immune system disturbances by very low-intensity EMF exposure may be involved in cellular damage and impaired healing.
• Genetic mutations along with exposure to EMFs permit too many calcium ions inside the cell. In ASD calcium signalling is disrupted by inflammation, environmental agents, various genes associated with autism or a combination of all three disruptors. Understanding how the calcium channels in our cell membranes open in response to electrical voltage is the key mechanism that allows EMF to impact health (Wen, Alshikho & Herbert 2016, Pall 2013).
• Heavy metal toxicity and inadequate detoxification pathways: exposure to electromagnetic radiation may facilitate the trapping of heavy metals in cells. This may accelerate the onset of symptoms caused by heavy metal toxicity as well as inhibiting clearance. (Carlo & Mariea 2007) Additional toxic chemical loads in the body also permit extra calcium to enter cells (Wen, Alshikho & Herbert 2016).

All of the above phenomena can potentially increase the ‘allostatic load’ (wear and tear on the body) in individuals with ASD as well as amplify their symptoms. Reducing exposure to EMFs may improve symptoms of ASD by assisting physiological repair rather than interfering with it (Herbert & Sage 2013 a). 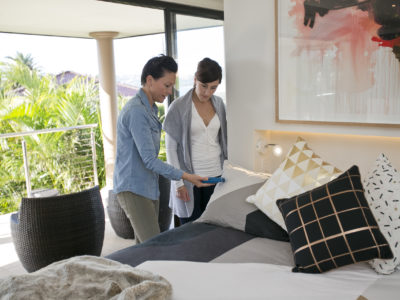 What can you do?
Although the jury is still out on the long-term health implications of digital (wireless) technologies, we should be aware of the potential effects these technologies have on us. We should be particularly mindful of behavioural changes in children and adolescents through their interactions with modern digital technologies (Hardell 2018)

1. Minimise the use of devices. Individuals with existing neurological conditions involving cognitive, learning, attention, memory, behavioural issues should be immersed with wired learning, living and sleeping environments where possible. Reduce exposures especially at night by sleeping more than 1 metre from fuse boards, meter boards and electrical appliances that operate at night (Herbert & Sage 2013 a, Sage & Burgio 2018).
2. Reduce physiological stressors in classrooms e.g. elevated EMF/RFR, since exposure may hinder social, academic and behavioural progress (Herbert & Sage 2013 a).
3. Reduce overall allostatic (stress) load on the body. Both psychological and physiological stress is associated with EMF/RFR exposure and this causes a disturbance to the body’s homeostasis. Homeostasis is the ability of the body to maintain balance internally despite changes in external conditions.
• Minimise environmental chemical exposure from sources such as fragrances and herbicides. This is crucial during pregnancy and other critical developmental periods as exposure to toxic chemicals can diversify autism development (Wong, Wais & Crawford 2015).
• Support health and wellbeing through high quality nutrition. For more information check out http://www.staraniseorganic.com/ and https://www.westonaprice.org/

If you are concerned about electromagnetic fields in your home, book a consultation with Building Biology NSW. Contact Kelly, Kelly@buildingbiologynsw.com.au.

Carlo GL, Mariea TJ. 2007, ‘Wireless radiation in the aetiology and treatment of autism: clinical observations and mechanisms.’ Journal of the Australasian College of Nutritional and Environmental Medicine, vol 26, no. 2, pp. 3-7.